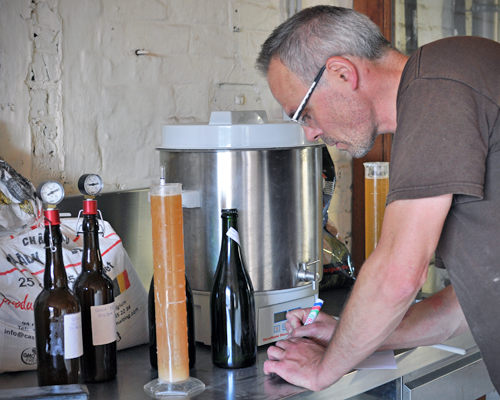 The idea for a new beer recipe often occurs by chance. It starts by the discovery of a new variety of malt or hop which spurs the brewer’s imagination. Smell a hop flower, taste a new malt, and ideas abound…

New beer projects are then created in the lab, in a little 20-litre installation. If the tests are conclusive and please the team, it’s the turn of our friends and acquaintances to taste the beer and to give their opinions. This is a good way of learning how our projects might be accepted by the market. Moreover, it regularly happens that certain beers, which were initially OK, do not get beyond the laboratory stage… 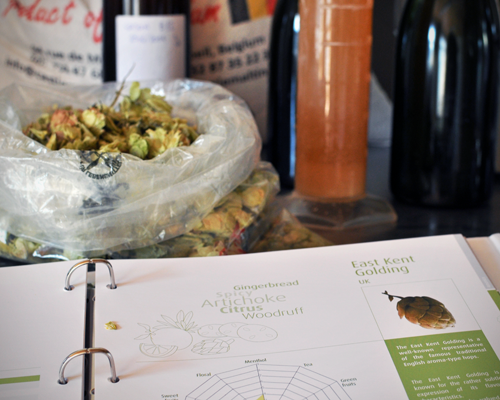 Then, on the basis of those comments and opinions, the recipe is adapted then produced on the main installation. The first brews regularly see the proportions of the various ingredients adapted in the light of the successive tastings. After a few brews, the recipe is definitively adopted and the new beer can be enjoyed by the general public. 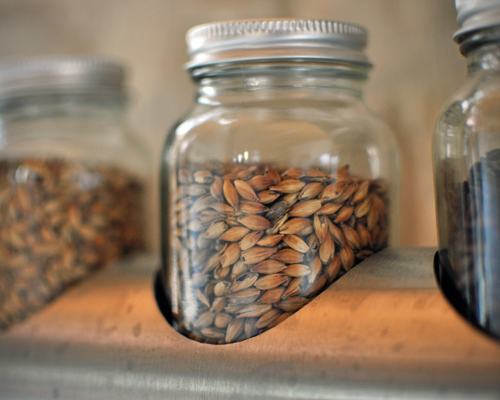 Take a grain of barley (let’s call it the hordeum disticum), matured under the setting sun on a summer evening. Convince it (with a little bit of persuasion) that it is ready to do its job, i.e. to germinate and give birth to a new generation of barley plantlets. At this stage it will need to find the strength to sprout.

It has its own larder, its starch reserves (a chain divided into amylose and amylopectin). All of this has been packed into its coat (cellulose wall), to help it get through the winter. 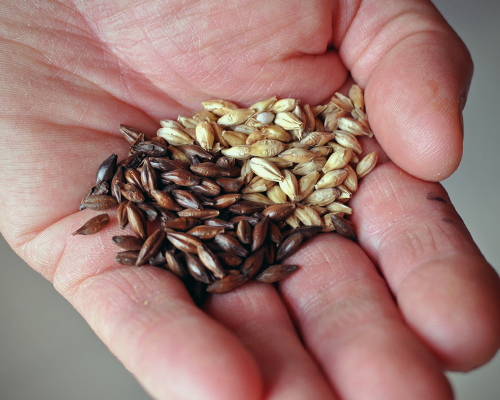 In order to germinate, it needs energy, simple sugars. First of all will make tools to help it break its starch reserves down into little bits: these are the enzymes called peptidases, beta-glucanases and alpha-amylases. With their help, it will be able to break down its wall and cut its starch reserves down into shorter sugars, which have the energy for growth….
…but this is not what lies ahead for the hordeum! Without realising (it does not feel a thing), we stop it from going any further in the drying process. It has become malt grain. 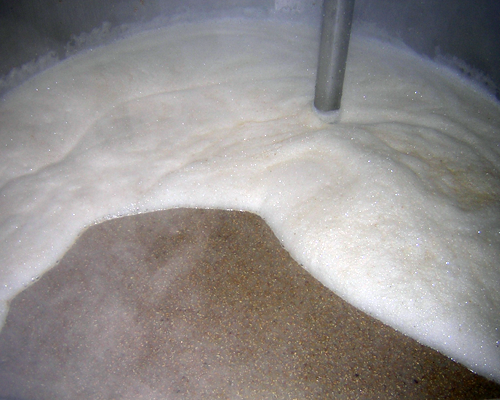 This is where the brewer comes in. As a kind of commemoration, he would like to pick up where the hordeum (God rest its soul) left off, turning the complex sugars into simple sugars (maltose and maltotriose), and the proteins into amino acids.

The crushing process opens the grain up to make the starch reserves accessible.

After being soaked in hot water (in the mash tun), the tools made by the late hordeum (who fell for it) will be put to work. The peptidase system works well from 45 to 55 °C. Its pal alpha-amylase prefers temperatures of about 60 °C. Beta-amylase, the mad fool, prefers 65 to 68 °C.
Once they have each done their thing as far as the brewer lets them, the starch reserves and the proteins turn into amino acids and short sugars. This sugary paste is called the mash. 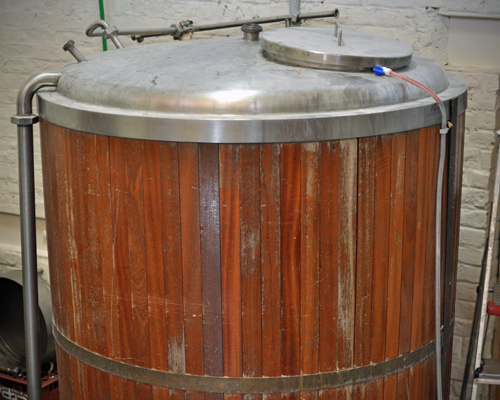 As we want to make beer rather than wheat bread, the mash is transferred into the clarifying vat. We need to take its old winter coats (the barley grain wall). They will drop to the bottom of the vat and make a filtering cake (these are the slops).These slops will be fed to cows so they can make decent cheese to enjoy with a few beers (a Tournay or two for instance). But please be patient a little bit longer – we have not quite reached the tasting stage…
During the filtering process, the juice that flows through the slops under the clarifying vat is called the wort. This is a sweet juice containing all the goodness of the malt. It is really good for colds and sore throats (just ask Jean). 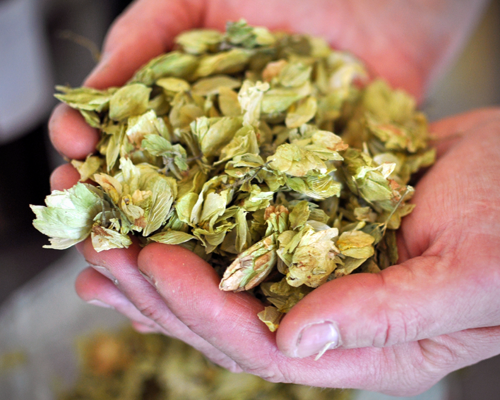 The aim of the boiling is to concentrate the wort and sterilise it. This is also the point when the brewer adds the hops that give the Tournay its distinctive delicious aroma.
Four aromatic, embittering hops are used, in very precise proportions and at exactly the right moment. The embittering hop will be added at the start of the boiling, while the aromatic hops, in the form of flowers or pellets, will be added later, in order to prevent the precious aromas from evaporating. 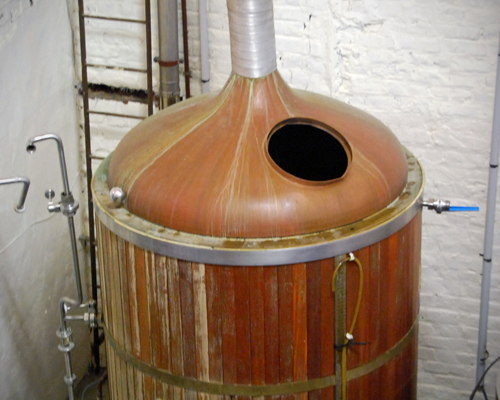 During the boiling process, the proteins from the malt coagulate (this is called the break).
In order to eliminate this “trub”, as it is called, we start stirring the wort. This “whirlpool” effect concentrates the trub in the centre of the vat and allows us to extract a clear wort during the transfer to the fermenters.
The hopped and boiling wort then passes through a plate exchanger which cools it from 100 °C to 23 °C. 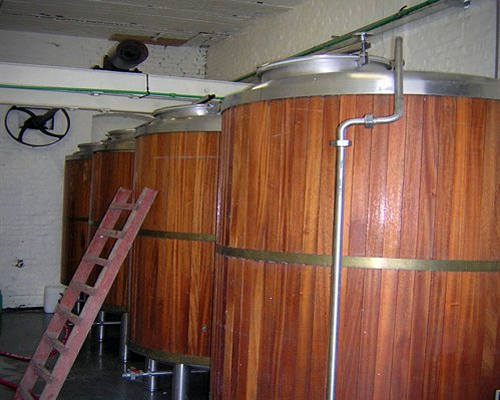 At 23 °C, the hopped wort is the perfect food at the perfect temperature for the yeast (Saccharomyces cerevisae). But the several million cells per millilitre are still not enough to make our heavenly brew.
The yeast breathes. It needs oxygen just as we do. The oxygenation of the wort allows the yeast to breathe and multiply. When all the oxygen has been used up, the yeast cell employs a survival mechanism: fermentation. During this process the yeast uses the sugars produced during the brewing to turn them into alcohol and carbon dioxide.
The carbon dioxide escapes through the foam trap. The intensity of the degassing gives us an idea of how the fermenting is going. We can measure the progress of the fermentation by the decrease in density (attenuation). When the yeast has nothing left to eat, it slows down its activity, and gradually goes to sleep.

The beer will be cooled down to around 2 °C, and the yeast will be put into hibernation to stop it from indulging in cannibalism. This would give a beer a nasty taste and would not be ethical. This is the waiting period, during which the beer will become clearer and more refined 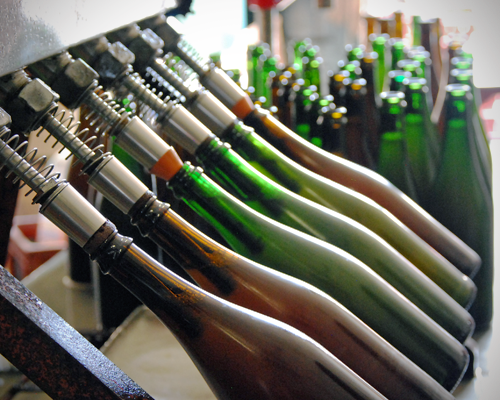 At this stage, we add the sugar which will be used by the yeast when it wakes up in the hot chamber. During refermentation in the bottle, the gas produced will stay trapped in the bottle, making the beer fizzy and contributing to the thickness of the head. 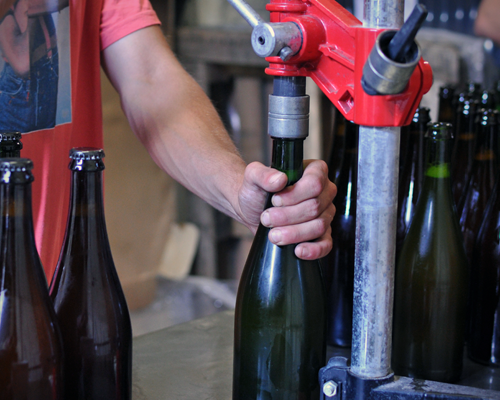 All we have to do now is wait for just one month before we can finally enjoy this delicious nectar, with all the amazing harmony of its fruit aromas, produced naturally by the yeast. This is the brewer’s brainchild, steeped in centuries of tradition, but made with the help of modern technology.